About the Topol Review

Preparing the healthcare workforce to deliver the digital future...

The Secretary of State for Health and Social Care commissioned ‘The Topol Review: Preparing the healthcare workforce to deliver the digital future’, as part of the draft health and care Workforce Strategy for England to 2027 – Facing the Facts, Shaping the Future.

The Topol Review, led by cardiologist, geneticist, and digital medicine researcher Dr Eric Topol, explores how to prepare the healthcare workforce, through education and training, to deliver the digital future. Dr Topol appointed a Review Board and three Expert Advisory Panels. HEE provided the secretariat team to facilitate the Review.

The Topol Review is now published and it makes recommendations that will enable NHS staff to make the most of innovative technologies such as genomics, digital medicine, artificial intelligence and robotics to improve services. These recommendations support the aims of the NHS Long-Term Plan, and the workforce implementation plan, helping to ensure a sustainable NHS.

The Review advises on: 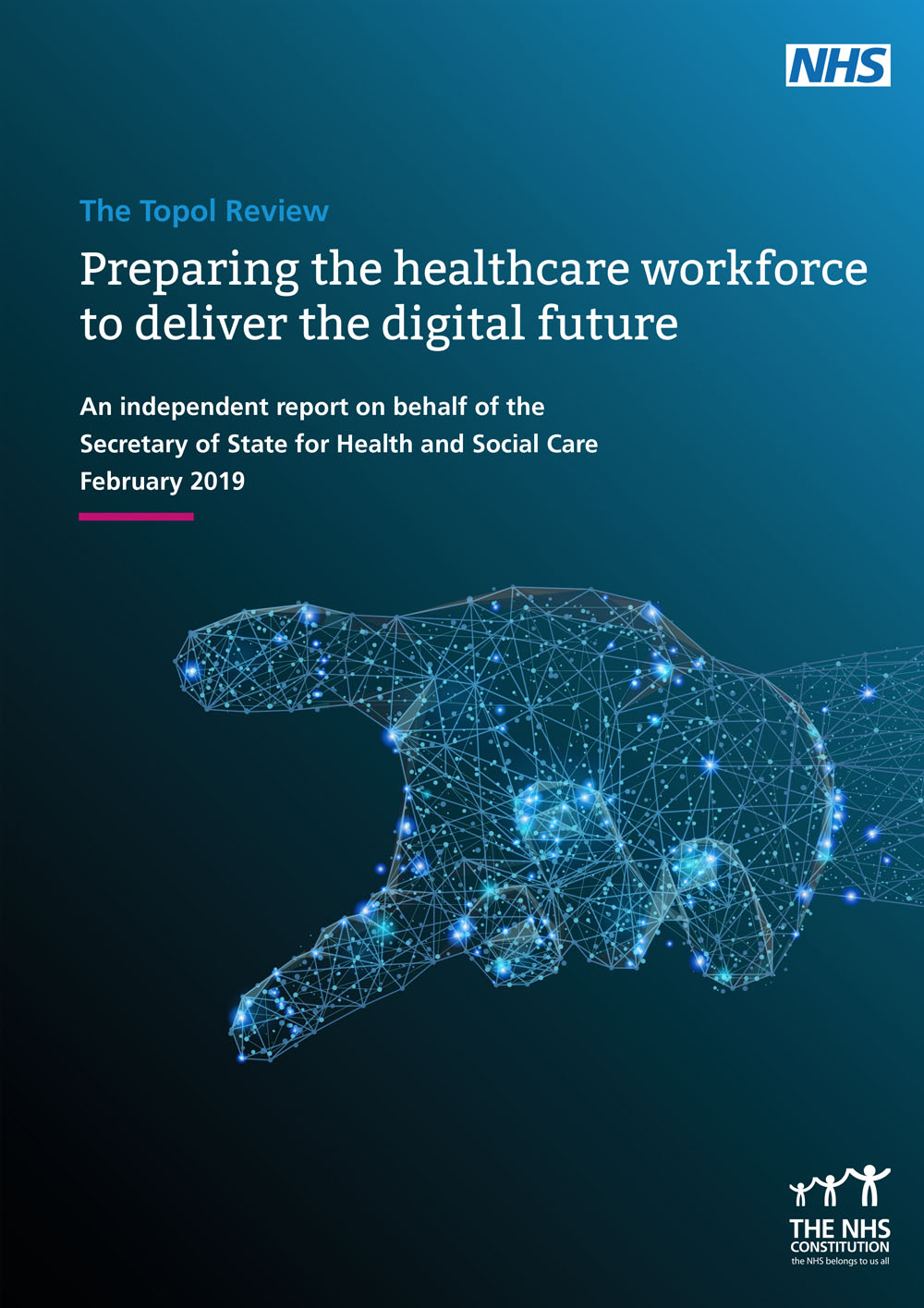 Preparing the healthcare workforce to deliver the digital future

An independent report on behalf of the Secretary of State for Health and Social Care, February 2019. 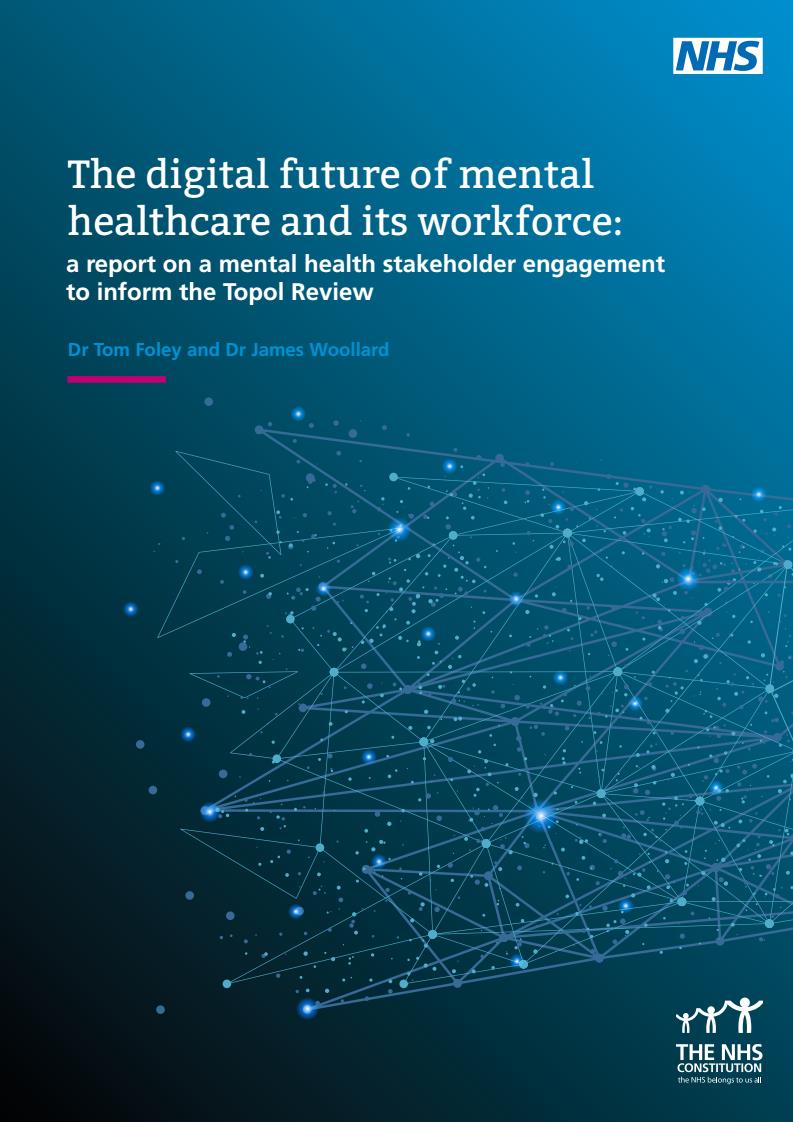 A report on mental health stakeholder engagement to inform the Topol Review, by Dr Tom Foley and Dr James Woollard.

Good mental health services are now recognised as vital to the NHS and to the health of the nation. With that in mind, the NHS Long Term Plan proposes to significantly increase mental health investment and envisages data and technology as central to transforming services.

The Topol Review was established to explore how technology will impact on healthcare and its workforce, focusing on the impact of digital health, genomics, robotics and artificial intelligence over the next twenty years. This supplementary report explores these questions within mental health.

What is the scope of the Topol Review?

The Review provides independent advice to the Secretary of State for Health and Care on:

The final report explores the likely impact of these changes on the required skills, selection, education, training and development of both current and future NHS staff.

Who led the Review?

Dr Eric Topol from The Scripps Research Institute was asked to lead this review, by the then Secretary of State for Health, Jeremy Hunt. HEE was chosen to help facilitate this work. Patrick Mitchell is HEE’s senior responsible officer for the Review.

What was the approach taken?

The Review examined the educational implications of innovation in the ‘here and now’, as well as looking to how new technologies and developments are likely to change the roles and functions of clinical staff, staff working in the clinical environment. A Review Board was established, supported by three Expert Advisory Panels, on artificial intelligence, digital medicine, and genomics. Our Panels explored the evidence and insights gathered from a diverse range of sources, thinking about the implications for the NHS workforce across the next 20 years. In addition to these expert panels several working groups were formed to support themes that cut across the three expert panels – organisational development ethics, education, health economics and mental health.

Who led the Expert Advisory Panels?

Each Expert Advisory Panel was chaired by leading experts in the field.

What and who did the call for evidence involve?

The call for evidence to inform the Review was launched with the publication of the interim report and ran throughout the summer of 2018. An open call for evidence on a digital platform resulted in 114 case reports submissions and 130 contributions to online discussions. Additionally, a series of nationwide stakeholder engagement events were held; the views of approximately 200 key stakeholders were collected during these conversations.

As mental health was recognised to be of importance and may have differing needs in a digital future, a separate mental health stakeholder engagement was undertaken. Five expert focus groups were held consisting of diverse subject matter experts. Additionally, a series of one-to-one interviews were also conducted with mental health experts.

The Topol Review call for evidence benefitted from an outstanding response and generated a wealth of fascinating insights and valuable evidence. We would like to thank everyone who contributed: NHS staff, academic and educational institutions, NHS trusts, NHS arm’s-length bodies, charities, patients and technology developers and providers. Their shared experience helped to build an understanding of which technologies are already being used effectively, and which offer the best potential to be used in healthcare in the future. A report on the mental health engagement work was published to accompany the final report.

How was the data on the potential impact of digital healthcare technologies on workforce productivity derived and is it accurate?

The productivity data developed within the Topol Review are high-level estimates based on hypothetical scenarios designed to illustrate the potential scale of impact from digital healthcare technologies on a subset of NHS services, assuming that the relevant technology matures and is adopted throughout the NHS in England. They provide us with an insight into what the future might look like in the decade ahead, and show the potential that digital healthcare technologies have for giving time back to healthcare professionals.

The productivity data should be viewed as first-order approximations, produced by blending current case study findings with expert opinion, published evidence and publically available data. Due to the uncertain nature and unpredictable timescale of technological developments, there is a challenge of projecting their impact over 10 to 20 years, however these are as accurate as possible based on current available evidence.

How did the Topol Review arrive at the top ten technologies?

In order to appreciate how genomics, digital medicine, artificial intelligence and robotics will change the roles and functions of clinical staff over the next two decades, the Expert Advisory Panels needed to consider which technologies may have the greatest impact on the healthcare workforce.

Recognising that the development of future technologies is predictably unpredictable, the Panels undertook an initial horizon scanning exercise which highlighted around 50 technologies before distilling these down into the top ten technologies likely to have the greatest impact on the workforce.

These ten technologies were used to provide a base on which to answer the questions posed by the Secretary of State for Health and Social Care within the Topol Review.

Why does the report not include the non-clinical workforce?

The Topol Review was specifically asked about change in the roles and functions of clinical staff in all professions over the next two decades. One of the presuppositions on which the Review has been predicated is that the new medicine, as envisioned, will require extensive education and training of the clinician workforce and the public, with cultivation of a cross-disciplinary approach that includes data scientists, computer scientists, engineers, bioinformaticians, in addition to the traditional mix of pharmacists, nurses and doctors. For technology to be of maximum value to the NHS, the entire healthcare workforce will need to be supported to work in this technology-enhanced environment.

‘Healthcare workforce’ in this report is taken to encompass scientific, therapeutic and technical disciplines, as well as managers and commissioners alongside clinical staff. Almost the entire ‘healthcare workforce’ is likely to be affected and should all be offered the opportunity to develop a broad scope of digital and genomic literacy.

How did the Review engage with colleagues working in mental health and how is this reflected within the report and the recommendations?

Mental health was identified as one of the priority themes within the Review alongside-primary care, acute medicine and frailty. During the gathering of evidence, a third of the events undertaken focused solely on mental health. The specific engagement exercise on mental health provided a supplementary report for the Review Board to consider.

Furthermore, the Topol Review team included mental health practitioners, both in the Expert Advisory Panels and the Review programme team, providing insight and evidence to inform the Review. The discussion of top technologies, use cases and digital medicine sections all share examples relating to mental health.

How did the Review engage with colleagues working in primary care and how is this reflected within the report and the recommendations?

Primary care is one of several priority themes within the Review – alongside mental health, acute medicine and frailty. The Topol Review included GPs and trainees, both in the expert advisory panels and the Review programme team, providing insights and evidence to inform the Review. The views of general practitioners were sought during the Topol review engagement with RCGP members participating in associated evidence gathering exercises.

The discussion of top technologies, use cases and technology sections all share examples relating to primary care, for instance innovations in telemedicine. One of the future personas within the report, Tom, focuses on how community nurses may combine their role with use of technology to support patients with chronic illness.

How did the Review engage with nurses and how is this reflected within the report and the recommendations?

The Topol Review included nurses in the expert advisory panels and in the Review programme team, providing insights and evidence to inform the Review. The views of nurses were sought in the Topol evidence gathering events, which included senior colleagues from the Royal College of Nursing and the Nursing and Midwifery Council.

The Review also benefitted from linking with senior nursing colleagues across the Arm’s length Bodies. The discussion of top technologies, use cases and technology sections all share examples relating to primary care, for instance innovations in telemedicine.

One of the future personas within the report, Tom, focuses on how community nurses may combine their role with use of technology to support patients with chronic illness. Additionally, a Digital Nurse Champion mentors Tom on his career journey.

The launch of the final report of the Topol Review

Preparing the healthcare workforce to deliver the digital future

Dr Eric Topol introduces The Technology Review, which he chaired, facilitated by Health Education England, and explores the potential of innovative technologies on the skills required by NHS staff. Discussion follows with NHS figures discussing the potential of the Topol Review to prepare the healthcare workforce to deliver the digital future.

Views across the NHS

Short film of health professionals discussing the potential of the Topol Review to prepare the healthcare workforce to deliver the digital future. 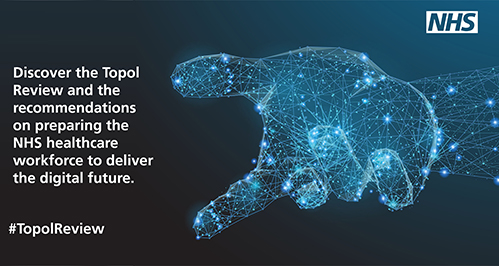 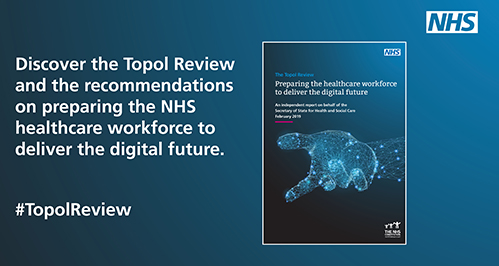 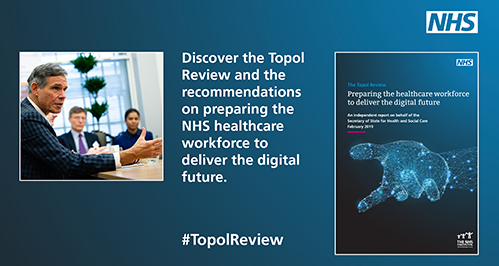 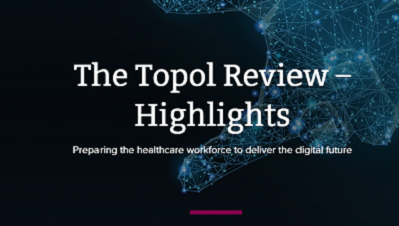 Printable version of the report